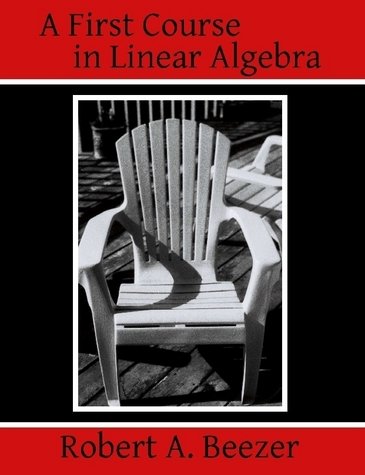 A First Course in Linear Algebra
by Robert A. Beezer

Description:
A First Course in Linear Algebra is an introductory textbook aimed at college-level sophomores and juniors. Typically such a student will have taken calculus, but this is not a prerequisite. The book begins with systems of linear equations, then covers matrix algebra, before taking up finite-dimensional vector spaces in full generality. The final chapter covers matrix representations of linear transformations, through diagonalization, change of basis and Jordan canonical form. Along the way, determinants and eigenvalues get fair time.

Linear Algebra with Applications
by W. Keith Nicholson - Lyryx
The aim of the text is to achieve a balance among computational skills, theory, and applications of linear algebra. It is a relatively advanced introduction to the ideas and techniques of linear algebra targeted for science and engineering students.
(46894 views)

Linear Algebra: An Introduction to Mathematical Discourse
- Wikibooks
The book was designed specifically for students who had not previously been exposed to mathematics as mathematicians view it. That is, as a subject whose goal is to rigorously prove theorems starting from clear consistent definitions.
(10355 views)

Linear Algebra: A Course for Physicists and Engineers
by Arak Mathai,‎ Hans J. Haubold - De Gruyter Open
This textbook on linear algebra is written to be easy to digest by non-mathematicians. It introduces the concepts of vector spaces and mappings between them without dwelling on theorems and proofs too much. It is also designed to be self-contained.
(5043 views)