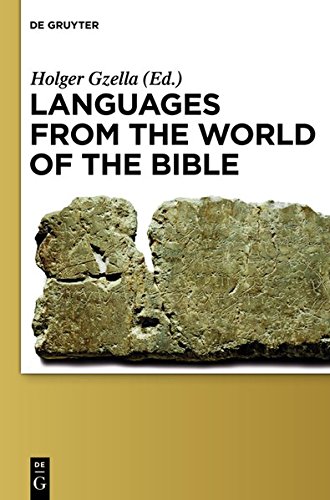 Languages from the World of the Bible
by Holger Gzella

Description:
The alphabetic script is part of the lasting heritage of the ancient Near East. It unites a number of newly-emerging civilizations in ancient Syria-Palestine, which together constitute the immediate background of the Hebrew Bible. Transformed by the impact of Hellenism, they also shaped the social-historical and cultural setting of the New Testament. This work presents fresh and concise yet thorough overviews of the relevant languages and their interaction.

Introduction to Linguistics
by Edward Stabler - UCLA
What are human languages, such that they can be acquired and used as they are? This text surveys some of the most important and recent approaches to this question, breaking the problem up along traditional lines. The emphasis is on methods.
(18836 views)

Essentials of Linguistics
by Catherine Anderson - McMaster University
This book is suitable for any beginning learner of linguistics but is primarily aimed at the Canadian learner, focusing on Canadian English for learning phonetic transcription, and discussing the status of Indigenous languages in Canada.
(1435 views)