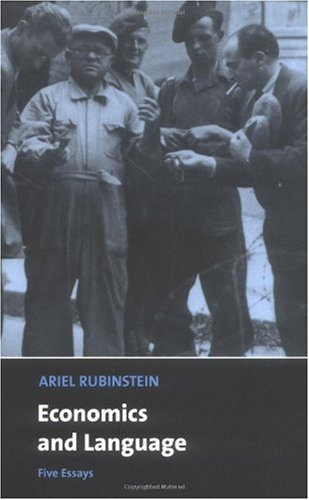 Economics and Language
by Ariel Rubinstein

Description:
This short book comprises five essays investigating both the economics of language and the language of economics. Ariel Rubinstein touches on the structure imposed on binary relations in daily language, the evolutionary development of the meaning of words, game-theoretical considerations of pragmatics, the language of economic agents and the rhetoric of game theory.

The Pure Theory of Capital
by Friedrich A. Hayek - Ludwig von Mises Institute
The greatest failing of non-Austrians theories of macroeconomics is that they lack a robust theory of capital. F.A. Hayek sought to fill out the theory of the business cycle with an impenetrable one, and the result was this remarkable 1941 treatise.
(12054 views)

Capital and Its Structure
by Ludwig Lachmann - Ludwig von Mises Institute
A robust theory of capital that incorporates an Austrian understanding of the business cycle and the market process. This book remains a seminal study written while the author was at the height of his intellectual powers.
(10539 views)

Capital and Production
by Richard von Strigl - Mises Institute
Strigl's important work is translated to English. The book links Eugen von Böhm-Bawerk's production theory and Mises's business cycle theory, and gives a pathbreaking account of the role of consumers' goods within the structure of production.
(11194 views)

Mathematical Analysis for Economists
by R. G. D. Allen - Macmillan And Company
The mathematical methods described are used in the elucidation of problems of economic theory. Illustrative examples are added and it is hoped that the reader will become familiar with the mathematical tools and applications to concrete problems.
(3288 views)