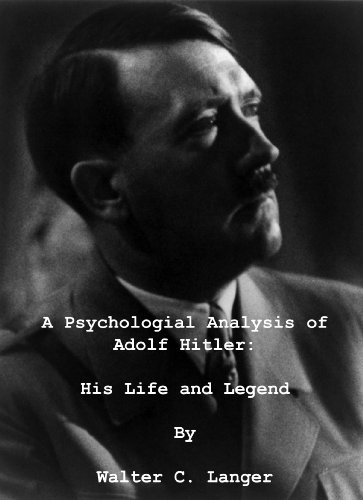 A Psychological Analysis of Adolph Hitler: His Life and Legend
by Walter C. Langer

Publisher: National Archives of the US 1972
Number of pages: 176

Description:
What did they know about Adolph Hitler when they were planning D-day? This is a psychological profile produced in 1943 by the O.S.S. (forerunner to the C.I.A.) used to help the Allied commanders understand the Nazi leader. This study is not propagandistic in any sense of the term. It represents an attempt to screen the wealth of contradictory, conflicting and unreliable material concerning Hitler into strata which will be helpful to the policy-makers and those who wish to frame a counter-propaganda.

The Story of Mankind
by Hendrik van Loon - Boni and Liveright
This book, for history buffs and the historically challenged alike, covers human history from prehistoric times, when our earliest ancestors were learning to communicate with grunts, right through to the issues of the latter 20th century.
(14841 views)

How Diplomats Make War
by Francis Neilson - Ludwig von Mises Institute
The first truly revisionist account of the origins of World War I to appear in English. The thesis is that Germany didn't bear some unique guilt for the war. The volume is written with much facility of expression and a large fund of materials.
(13404 views)