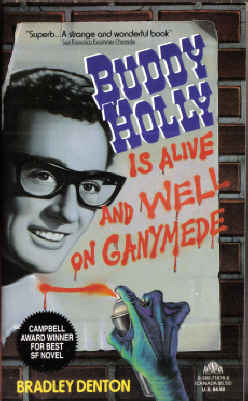 Buddy Holly is Alive and Well on Ganymede
by Bradley Denton

Description:
When televisions worldwide begin broadcasting a nonstop, noninterruptible live performance by Buddy Holly purporting to originate somewhere in the vicinity of Jupiter, Oliver Vale -- the apparent object of the broadcasts -- finds himself drafted for a mission so secret that even he is not sure of its purpose.

Earth Alert!
by Kris Neville - Project Gutenberg
Kris Neville was an American science fiction writer. His most famous work, Bettyann (1970) is considered an underground classic of science fiction. This e-text was produced from Imagination Stories of Science and Fantasy February 1953.
(10916 views)

The Earthbound Series
by D M Arnold - VIRTUALimprint
The EARTHBOUND Series is a set of five character driven stories in a science fiction setting, featuring an ordinary hero with everyday problems: He has a boss, a job that's a grind, a wife who doesn't understand him and a girlfriend on the side...
(8666 views)

Blind Spot
by Bascom Jones - Galaxy Science Fiction
Our civilization predates that of Earth's by millions of years. We are an advanced, peaceful race. Yet, since Earth's first rocket landed here thirteen years ago, we have been looked upon as freaks and contemptuously called 'bug-men' behind our backs!
(11185 views)

Down and Out in the Magic Kingdom
by Cory Doctorow - Tor Books
A wholly original mix of a science fiction book and a satire. Jules is 10 year old young man, he's old enough to see the cure for death, to learn 10 languages and compose 3 symphonies, and he takes up residence in Disney World.
(11302 views)