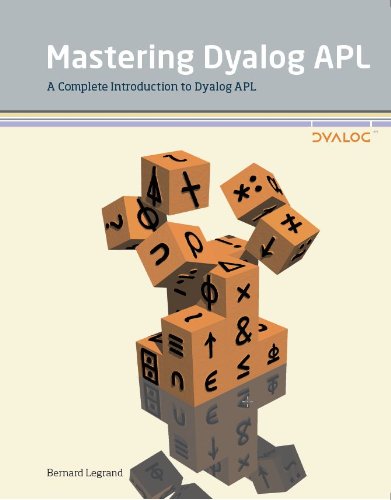 Description:
This book is a complete guide to the use of Dyalog APL describing a large number of common coding techniques, and discussing a variety of interfaces, including file handling and COM/OLE. It provides a thorough introduction to developing Graphical User Interfaces in Dyalog APL and wraps up with an overview of the publishing tool NewLeaf and the RainPro graphics engine.

Programming in D
by Ali Çehreli
This book is for ruby programmers who are intrigued by swift and want to learn it. It's focused on swift, but in each chapter we'll frame our discussion of swift in terms of equivalent features in ruby and highlight and compare the behaviour of each.
(4536 views)

Programming Languages at a Glance
by Andreas Hohmann - Minimal Programming
This book tries to explain a number of programming languages, covering a wide range from currently popular ones such as Java, Perl, Python, and C# to less known languages. When describing the languages, I want to find out what they have in common.
(11390 views)

Beyond Java
by Bruce Tate - O'Reilly Media, Inc.
Bruce Tate describes the characteristics of alternative languages, likely successors to Java. The book will teach you a few new languages and help you start building new skills, or you can use the introduced techniques to improve your work in Java.
(17874 views)

F# Programming
- Wikibooks
The F# programming language is part of Microsoft's family of .NET languages. F# is valuable to programmers at any skill level; it combines many of the features of functional and object-oriented programming styles into a uniquely productive language.
(3411 views)