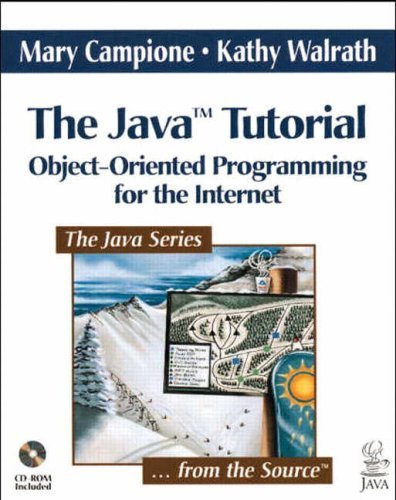 Description:
A practical, online guide to writing programs using the Java platform. The tutorial is organized into trails: groups of lessons on a particular subject. We currently have trails for Java newbies, general Java programming, applets, user interfaces, networking and security, new API in the JDK 1.1 release, native interfaces, and JavaBeans.

Introduction to Computer Science using Java
by Bradley Kjell - Central Connecticut State University
The text for a first course in computer science using the programming language Java. It covers the fundamentals of programming and of computer science. It is assumed that you have the Java version 5.0 or later and a text editor such as Notepad.
(25023 views)

Java for the Beginning Programmer
by Jeff Heaton - Heaton Research, Inc.
The book teaches Java to someone with absolutely no programming background. It focuses on core programming topics such as variables, looping, subroutines, and program layout. This course focuses on real programming techniques, and not using an IDE.
(16102 views)

Introduction to Programming in Java: An Interdisciplinary Approach
by Robert Sedgewick, Kevin Wayne - Princeton University
This book is an interdisciplinary approach to the traditional CS1 curriculum. It teaches all of the classic elements of programming. The book is organized around four areas of computer science: programming, machine architecture, theory, and systems.
(15698 views)

Java - Servlets - JSP
by V. Mukhi, S. Mukhi, N. Kotecha - bpbonline.com
In this book, we start off assuming that you know no programming language at all. We teach you Java one concept at a time and taking things real slow and easy. We believe that the best way to learn is to try and absorb just one concept at a time.
(10827 views)