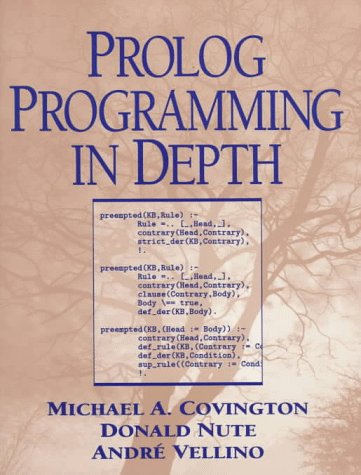 Description:
Full coverage of the Prolog programming language including the latest ISO standard (as of 1997). Includes ready-to-run code for expert system shells, other intelligent problem-solvers, and algorithms to read foreign file formats, even Lotus spreadsheets.

The Art of Prolog
by Leon S. Sterling, Ehud Y. Shapiro - The MIT Press
Hitherto, knowledge of how to use Prolog for serious programming has largely been communicated by word of mouth. This textbook sets down and explains for the first time in an accessible form the deeper principles and techniques of Prolog programming.
(1850 views)

Prolog Experiments in Discrete Mathematics, Logic, and Computability
by James Hein - Portland State University
Programming experiments designed to help learning of discrete mathematics, logic, and computability. Most of the experiments are short and to the point, just like traditional homework problems, so that they reflect the daily classroom work.
(16013 views)

Adventure in Prolog
by Dennis Merritt - Springer
This book takes a pragmatic, rather than theoretical, approach to the language and is designed for programmers interested in adding this powerful language to their bag of tools. Much of the book is built around the writing of a short adventure game.
(17640 views)