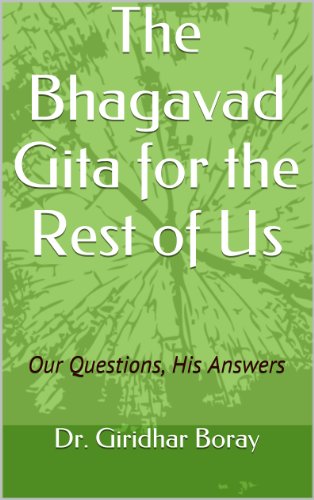 The Bhagavad Gita for the Rest of Us
by Giridhar Boray

Description:
Over centuries, The Bhagavad Gita has been considered an important spiritual guidebook and has influenced many thought leaders in human history. The Gita is conversational poetry set in an epic battlefield where a family of cousins are engaged in a war for control of a kingdom.

Kabir And The Kabir Panth
by G.H Westcott - Hesperides Press
Of all the great Hindu reformers, Kabir have had the greatest influence among the uneducated classes of Northern and Central India. He was described as the Indian Luther. The number of those who are under the influence of Kabir is great.
(16924 views)

An Introduction to the Philosophy of Yoga
by Swami Krishnananda - The Divine Life Society
Yoga refers to traditional physical and mental disciplines originating in India. This is a study of the mechanics of yoga from its subjective, objective and transcendental aspects. A complete guide-book almost incomparable in its nature.
(15544 views)

Vedic Mathematics
by W. B. Kandasamy, F. Smarandache - Automaton
In traditional Hinduism, the Vedas are considered divine in origin and are assumed to be revelations from God. In this book the authors probe into Vedic Mathematics and explore if it is really Vedic in origin or Mathematics in content.
(14848 views)

A Short History of Religious and Philosophic Thought in India
by Swami Krishnananda - The Divine Life Society
The book on the structure of Inner India, it offers to students of Indian culture a taste of its quintessential essence and, to those who are eager to know what India is, a colourful outline of the picture of the heart of India.
(16421 views)