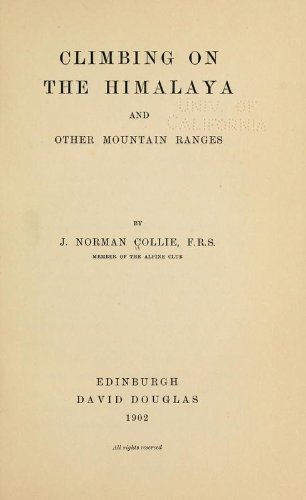 Climbing on the Himalaya and Other Mountain Ranges
by Norman Collie

Description:
The man who ventures amongst the Himalaya in order that he may gain a thorough knowledge of them must of necessity be a mountaineer as well as a mountain traveller. He must delight not only in finding his way to the summits of the mountains, but also in the beauties of the green valleys below, in the bare hill-sides, and in the vast expanses of glaciers and snow and ice...

True Tales of Mountain Adventures
by Aubrey le Blond - E. P. Dutton & Company
Mountaineering is not merely walking up hill. It is the art of getting safely up and down a peak where there is no path, and where steps may have to be cut in the ice; it is the art of selecting the best line of ascent under conditions which vary.
(4103 views)

The Mountain that was 'God'
by John H. Williams - G.P. Putnam's sons
This little book is about the great peak which the Indians named 'Tacoma' but which is officially called 'Rainier.' Like the glacial rivers, its text will be found a narrow stream flowing swiftly amidst great mountain scenery...
(3977 views)

Himalayan Dreaming
by Will Steffen - ANU Press
This book tells the story of Australian mountaineering in the great ranges of Asia, from the exploits of a brash, young colonial with an early British Himalayan expedition in the 1920s to the coming of age of Australian climbers in the 1980s.
(3049 views)

The Guardians of the Columbia
by John H. Williams
Mount Hood, Mount Adams and Mount St. Helens. From maps, descriptions of peaks and wilderness areas to detailed mountaineering proofs, enthusiasts can now experience the thrill of the greatest peaks as they were in the early part of the century.
(3737 views)