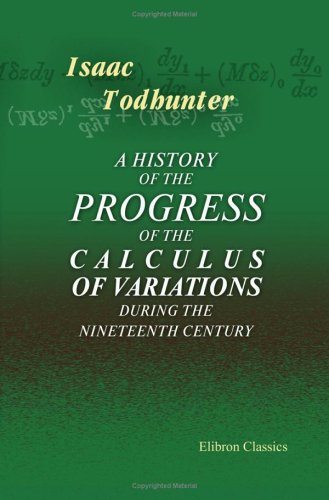 Description:
The book traces the progress of the Calculus of Variations during the nineteenth century: Lagrange and and Lacroix, Dirksen and Ohm, Gauss, Poisson, Ostrogradsky, Delaunay, Sarrus, Cauchy, Legendre, Brunacci, and Jacobi.

The Pythagorean Theorem: Crown Jewel of Mathematics
by John C. Sparks - AuthorHouse
The book chronologically traces the Pythagorean theorem from the beginning, through 4000 years of Pythagorean proofs. The text presents some classic puzzles, amusements, and applications. An epilogue summarizes the importance of the theorem.
(16672 views)

The Story of Euclid
by W. B. Frankland - George Newnes
Euclid was a Greek mathematician, often referred to as the 'Father of Geometry'. His Elements is one of the most influential works in the history of mathematics, serving as the main textbook for teaching mathematics until the early 20th century.
(13294 views)

Vedic Mathematics
by W. B. Kandasamy, F. Smarandache - Automaton
In traditional Hinduism, the Vedas are considered divine in origin and are assumed to be revelations from God. In this book the authors probe into Vedic Mathematics and explore if it is really Vedic in origin or Mathematics in content.
(15061 views)