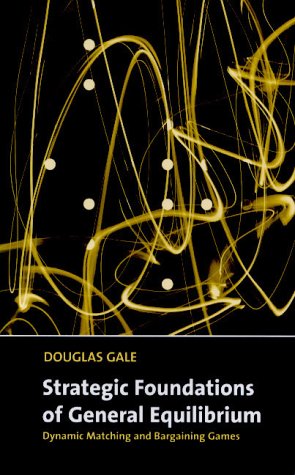 Description:
This book reports on a major research program to provide strategic foundations for the theory of competition. Making use of insights from game theory, search theory and bargaining theory, the author develops a model to explain what actually goes on in markets and how a competitive general equilibrium is achieved. Essential reading for graduate courses in game theory and general equilibrium.

More Games of No Chance
by Richard J. Nowakowski - Cambridge University Press
This book is a state-of-the-art look at combinatorial games, that is, games not involving chance or hidden information. The book contains articles by some of the foremost researchers and pioneers of combinatorial game theory.
(10916 views)

The Compleat Strategyst: Being a Primer on the Theory of Games of Strategy
by John D. Williams - RAND Corporation
When this book was originally published in 1954, game theory was an esoteric and mysterious subject. Its popularity today can be traced at least in part to this book, which popularized the subject for amateurs and professionals throughout the world.
(15879 views)

Game Theory
by Giacomo Bonanno - University of California, Davis
This is a textbook on non-cooperative Game Theory with 165 solved exercises. It is intended to be rigorous and it includes several proofs. It is appropriate for an undergraduate class in game theory and also for a first-year graduate-level class.
(7607 views)