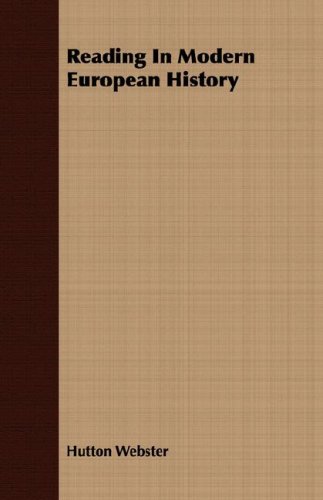 Description:
This volume of supplementary readings for a high-school course in modern European history consists of extensive extracts from memoirs, letters, diaries, speeches, and other primary sources of information for the great events and great personalities of the last three hundred years.

A History of Ireland
by Edmund Curtis - University Paperbacks
The traditions of the Irish people are the oldest of any race in Europe north and west of the Alps, and they themselves are the longest settled on their own soil. The book covers Ireland history from the origins to circa 1922.
(15112 views)

Henry IV, Makers of History
by John S. C. Abbott - Project Gutenberg
There is no portion of history fraught with more valuable instruction than the period of those terrible religious wars which desolated the sixteenth century. There is no romance so wild as the veritable history of those times.
(8846 views)

Vlad the Impaler: A Life From Beginning to End
- Hourly History
Many scholars argue that Vlad III Dracula, also known as Vlad the Impaler, is the real Dracula. He was known in western Europe for his cruelty, most especially his penchant for impaling his victims. He is said to have killed some 100,000 people ...
(3118 views)