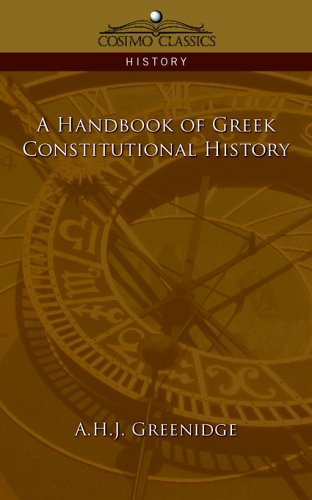 A Handbook of Greek Constitutional History
by A.H.J. Greenidge

Description:
The democratic principle in its extreme form is the assertation that the mere fact of free birth is alone sufficient to constitute a claim to all offices. It is never the claim of a majority to rule, but it is the demand that every one, whether rich or poor, high- or low-born, shall be equally represented in the constitution. This is what Aristotle calls the principle of numerical equality. -from "Chapter VI: Democracy" One of the most renowned classical scholars of the turn of the 20th century here offers a lucid and highly readable overview of a difficult and little understood aspect of Greek history: its public law, not just how it was structured but how it behaved in action. This 1896 book-perfect for university students, amateur historians, and readers of the history of the law-covers the full range of Greek legal development, from the origin of the city-state and the beginnings of the Greek monarchy to the social and political institutions of the far-flung Greek civilization to the rise of federalism and its long-term historical impact on the cultures that came after.

Homer and His Age
by Andrew Lang
The aim of 'Homer and His Age' is to prove that the Homeric Epics as wholes and apart from passages gravely suspected in antiquity present a perfectly harmonious picture of the entire life and civilization of one single age.
(11911 views)

From Rome to Byzantium
by Tom Green - ManyBooks
Provides a detailed overview of trading activity in the Roman and Byzantine Mediterranean, grounded in recent archaeological research. It is argued that free trade played a significant role in the nature of trading in Classical and Late Antiquity.
(8957 views)