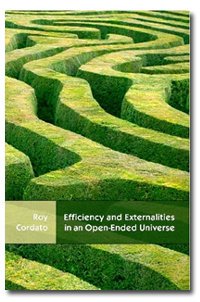 Efficiency and Externalities in an Open-Ended Universe
by Roy Cordato

Description:
The problem of externalities and efficiency is cited relentlessly in mainstream literature as the great rationale for government intervention. The Austrian tradition, however, takes another approach, viewing these supposed problems as having market solutions that depend on a view of economics rooted in an understanding of the competitive process.

The Secret Sins of Economics
by Deirdre McCloskey - Prickly Paradigm Press
In this pamphlet, McCloskey reveals what she sees as the secret sins of economics (there are two) that no one will discuss. In her view, these sins cripple economics as a scientific enterprise. She writes with passion and an unusually wide scope.
(12060 views)

Economics and Language
by Ariel Rubinstein - Cambridge University Press
Five essays investigating both the economics of language and the language of economics. The author touches on the structure of binary relations in daily language, the evolutionary development of the meaning of words, and more.
(15752 views)

Capital as Power: A Study of Order and Creorder
by Jonathan Nitzan, Shimshon Bichler - Routledge
The authors address the old theoretical conundrum in political economy -- the theory of capital -- with a view to supplying a more satisfactory answer to the question 'what is capital?' The work fits into the tradition of radical political economy.
(11253 views)