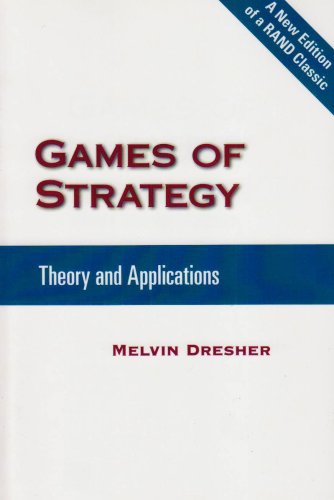 Games of Strategy: Theory and Applications
by Melvin Dresher

Description:
This book introduces readers to the basic concepts of game theory and its applications for military, economic, and political problems, as well as its usefulness in decisionmaking in business, operations research, and behavioral science.

The Compleat Strategyst: Being a Primer on the Theory of Games of Strategy
by John D. Williams - RAND Corporation
When this book was originally published in 1954, game theory was an esoteric and mysterious subject. Its popularity today can be traced at least in part to this book, which popularized the subject for amateurs and professionals throughout the world.
(15879 views)

An Introduction to Quantum Game Theory
by J. Orlin Grabbe - arXiv
This essay gives a self-contained introduction to quantum game theory, and is primarily oriented to economists with little or no acquaintance with quantum mechanics. It assumes little more than a basic knowledge of vector algebra.
(9542 views)