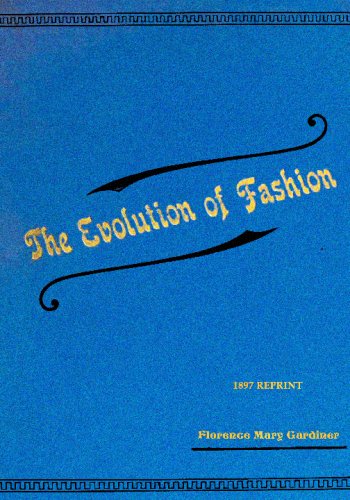 The Evolution Of Fashion
by Florence Mary Gardiner

Description:
The book lays no claim to being a technical treatise on a subject which is practically inexhaustible, but has been written with the intention of bringing before the general public in a popular manner circumstances which have influenced in a marked degree the wearing apparel of the British Nation.

The Age of Napoleon: Costume from Revolution to Empire, 1789-1815
by Katell Le Bourhis (ed.) - The Metropolitan Museum of Art
The book goes into detail on the fashions of this period and deals with other related subjects such as Napoleons efforts to revitalize the silk and lace industries of France to be used in his court and the costumes of his armies...
(8304 views)

Christian Dior
by Richard Martin, Harold Koda - Metropolitan Museum of Art
This is a portrait album of a sampling of Christian Dior's masterpieces shown in the 1996 New York Metropolitain Museum of Art's retrospective. Among the illustrations are extravagant evening wear, chic accessories, and details of Dior tailoring.
(7727 views)

English Costume
by Dion Clayton Calthrop - Adam & Charles Black
The world is a complicated picture of people dressing and undressing. The history of the world is composed of the chat of a little band of tailors seated cross-legged on their boards; they gossip across the centuries, feeling very busy and important.
(12716 views)

Woman as Decoration
by Emily Burbank - Dodd, Mead and Co.
This illustrated book is a brief guide for the woman who would understand her own type, make the most of it, and know how simple a matter it is to be decorative if she will but master the few rules underlying all successful dressing.
(16590 views)