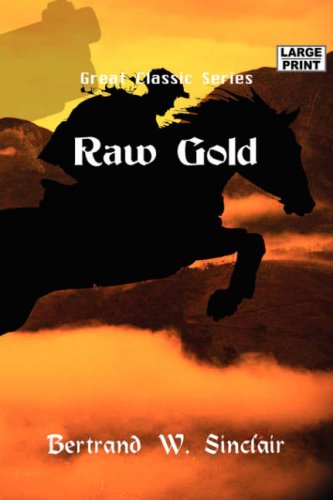 Description:
The Canadian border furnishes the scene of this tale of Wild West life--primitive, exhilarating, spiced with dangers. Particularly is it a delineation of the character of the Northwest mounted police, sent by the English government to keep order 'in a territory that was a city of refuge for tough people who had played their string out south of the line'.

Cabin Fever
by B.M. Bower
If you would test the soul of a friend, take him into the wilderness and rub elbows with him for five months. Either you will hate each other forever afterwards, or you will be close, unquestioning friends to the end of your days...
(5453 views)

The Mark of Zorro
by Johnston McCulley - Grosset & Dunlap
Novel narrates the adventures of a young man of the Californian aristocracy called Don Diego De la Vega, a young nobleman, son of a Spanish landowner, who lived in the then town of Los Angeles, in old Spanish California of the early 1800s.
(334 views)

The Rider of Golden Bar
by William Patterson White - ManyBooks
Spirited story, full of action, which should please readers of western fiction. The hero, who is elected sheriff on the supposition that he is lazy and easy-going, proves an unpleasant surprise to the corrupt ring that had supported him.
(7668 views)

The Gun-Brand
by James B. Hendryx - G.P. Putnam's Sons
Here was action -- life! Primitive man battling against the unbending forces of an iron wilderness. The red blood leaped through the girl's veins as she realized that this life was to be her life -- this wilderness to be her wilderness.
(7415 views)