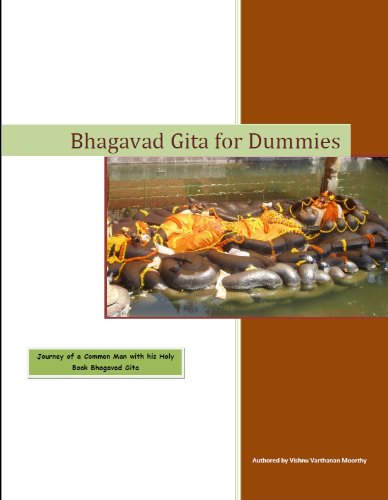 Description:
This book is about the common man who tries to understand Bhagavad Gita and apply the practices in his life. One among 500 crore people, a common man is still searching for identity and tries to lead a respectable life in day to day basis. When he reads Bhagavad Gita, what he interprets for his life and how he can apply to his life, this is here in this book.

The Bhagavad Gita for the Rest of Us
by Giridhar Boray - Smashwords
Over centuries, The Bhagavad Gita has been considered an important spiritual guidebook and has influenced many thought leaders in history. The Gita is set in an epic battlefield where a family of cousins are engaged in a war for control of a kingdom.
(4919 views)

Kabir And The Kabir Panth
by G.H Westcott - Hesperides Press
Of all the great Hindu reformers, Kabir have had the greatest influence among the uneducated classes of Northern and Central India. He was described as the Indian Luther. The number of those who are under the influence of Kabir is great.
(15304 views)

A Short History of Religious and Philosophic Thought in India
by Swami Krishnananda - The Divine Life Society
The book on the structure of Inner India, it offers to students of Indian culture a taste of its quintessential essence and, to those who are eager to know what India is, a colourful outline of the picture of the heart of India.
(14889 views)

Orissa under the Bhauma Kings
by Pandit Binayak Misra - Vishwamitra Press
This monograph discusses the problems connected with the Bhauma family. For easy comprehension of the subject the book gives the texts and translations of almost all the published Bhauma records and a large number of inscriptions.
(14767 views)