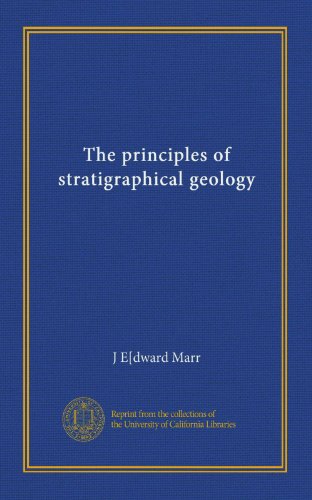 The Principles of Stratigraphical Geology
by J. E. Marr

Description:
It is the aim of the Stratigraphical Geologist to record the events which have occurred during the existence of the earth in the order in which they have taken place. He tries to restore the physical geography of each period of the past, and in this way to write a connected history of the earth.

Volcanoes of the United States
by Steven R. Brantley - US. Government Printing Office
The U.S. ranks third, behind Indonesia and Japan, in the number of historically active volcanoes. A few volcanoes have produced some of the largest and most dangerous types of eruptions in this century, while several others have threatened to erupt.
(3694 views)

Unsaturated Zone Hydrology for Scientists and Engineers
by James Tindall, James Kunkel - Pearson Education
This is a systematic coverage of state-of-the-art unsaturated zone hydrology. Coverage begins with the basic physical properties of clays, and moves on to contaminant transport, spatial variability, scaling, and fractals in the earth sciences.
(14974 views)

Common Minerals and Rocks
by William O. Crosby - D.C. Heath & Co
Our work in this short course will be limited to dynamical and structural geology. We will sketch the forces now concerned in the formation of rocks and rock-structures and the composition and other characteristics of the common minerals and rocks.
(6150 views)

Shaping a Nation: A Geology of Australia
by Richard Blewett (ed.) - ANU Press
Presented in a refreshingly non-linear format, the book summarises much of what we know about this country's geological history, discussing the fossil record and evolution of life across the continent, describing its mineral and energy reserves.
(4887 views)