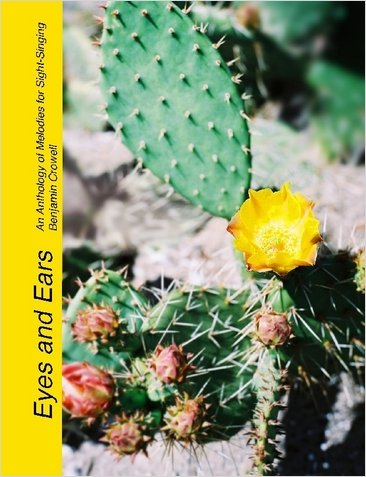 Eyes and Ears: An Anthology of Melodies for Sight-Singing
by Benjamin Crowell

Description:
Eyes and Ears is a book of melodies for use in practicing sight-singing. It currently contains about 400 melodies, arranged systematically for education. So far, I've concentrated on assembling a body of relatively easy material that would be sufficient for the first semester or two of a college-level musicianship course. There is a small amount of didactic text, but if you're going to use the book for self-instruction, you'll need some background in basic music theory, and preferably access to someone knowledgeable to provide guidance.

Harmony Explained: Progress Towards A Scientific Theory of Music
by Daniel Shawcross Wilkerson - arXiv
How does music actually work? We derive from first principles of Physics and Computation the following fundamental phenomena of music: the Major Scale, the Standard Chord Dictionary, and the difference in feeling between the Major and Minor Triads.
(18892 views)

Music of the Twentieth Century
by Ton de Leeuw - Amsterdam University Press
Ton de Leeuw was a truly groundbreaking composer. As evidenced by his study of compositional methods that melded Eastern traditional music with Western musical theory, he had a profound understanding of the history of twentieth-century music.
(10748 views)

Harmonica
- Wikibooks
The harmonica is much more than a mere toy; it can produce rich music that is impossible for many other instruments. It is easy to learn; no need to remember any fingerings etc., just remember that the notes ascend in a certain way.
(8374 views)

The Art of Voice-Production with Special Reference to the Methods of Correct Breathing
by A. A. Pattou - G.P. Putnam
The author writes for all those wishing to be guided by clear common sense rules and precepts, in the discovery of an easy and natural method of singing. He examines the voice in its cause, which is breath, and in its effect, which is tone.
(13379 views)