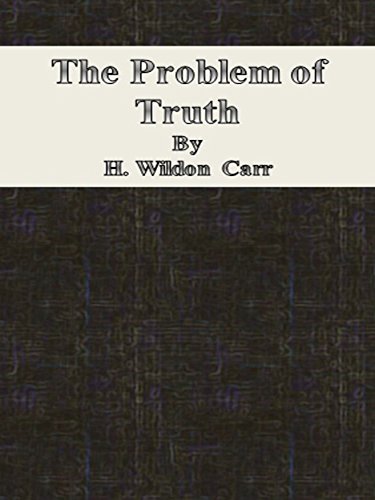 The Problem of Truth
by Herbert Wildon Carr

Description:
The problem of truth is a problem of philosophy. It is not a problem of merely historical interest, but a present problem -- a living controversy, the issue of which is undecided. Its present interest may be said to centre round the doctrine of pragmatism.

The Computer Revolution in Philosophy: Philosophy, Science, and Models of Mind
by Aaron Sloman - The Harvester Press
Some parts of the book are dated whereas others are still relevant both to the scientific study of mind and to philosophical questions about the aims of science, the nature of theories and explanations, and to questions about the nature of mind.
(9473 views)

Freud and his Critics
by Paul Robinson - University of California Press
In a witty, densely argued critique, Robinson levels the accusations of prominent anti-Freudians Frank Sulloway, Jeffrey Masson and Adolf Grunbaum. Robinson does an excellent job of explaining his opponents' arguments as well as his own.
(12264 views)

Kant's Philosophy of the Unconscious
by Piero Giordanetti (ed.) - De Gruyter Open
The unconscious, the other of consciousness, is a key problem of the critical philosophy. The purpose of the volume is to fill a substantial gap in Kant research and to offer a complete survey of the topic in different areas of research.
(3070 views)