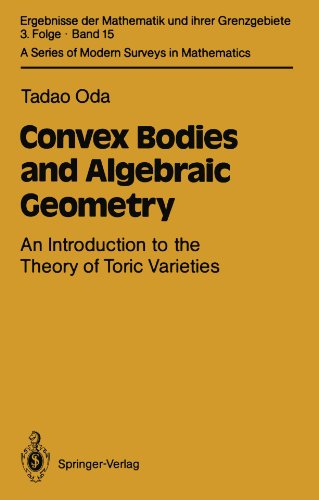 Description:
The theory of toric varieties (also called torus embeddings) describes a fascinating interplay between algebraic geometry and the geometry of convex figures in real affine spaces. This book is a unified up-to-date survey of the various results and interesting applications found since toric varieties were introduced in the early 1970's.

Lectures on Deformations of Singularities
by Michael Artin - Tata Institute of Fundamental Research
These notes are based on a series of lectures given in 1973. The lectures are centered about the work of M. Scahlessinger and R. Elkik on infinitesimal deformations. Contents: Formal Theory and Computations; Elkik's Theorems on Algebraization.
(6095 views)

Introduction To Algebraical Geometry
by A. Clement Jones - Oxford University Press
The author's aim has been to produce a book suitable to the beginner who wishes to acquire a sound knowledge of the more elementary parts of the subject, and also sufficient for the candidate for a mathematical scholarship.
(3285 views)