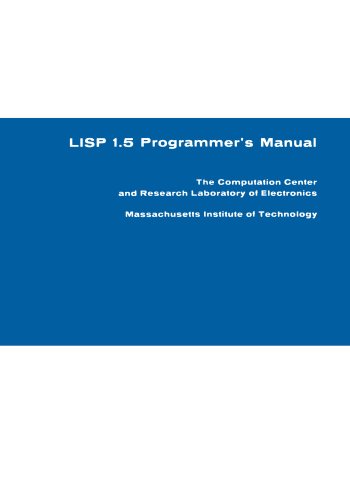 Common LISP: A Gentle Introduction to Symbolic Computation
by David S. Touretzky - Benjamin-Cummings Pub Co
This is a gentle introduction to Common Lisp for students taking their first programming course. No prior mathematical background beyond arithmetic is assumed. There are lots of examples, the author avoided technical jargon.
(23401 views)

Common Lisp: An Interactive Approach
by Stuart Charles Shapiro - W.H. Freeman & Company
The book is a self-paced study guide to Common Lisp programming language. It presents Lisp in a general setting, rather than in the context of a special field in which it is used. The text assumes experience with some imperative programming languages.
(11943 views)

Basic Lisp Techniques
by David J. Cooper, Jr. - Franz Inc.
The purpose of this book is to showcase the features of Common Lisp, and to give you a quick-start guide for using Common Lisp as a development environment. This guide gives you all the tools you need to begin writing Lisp applications.
(13387 views)