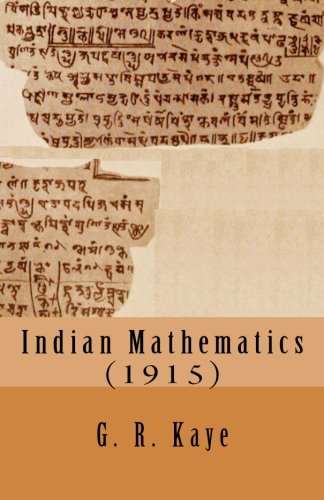 Description:
'Indian Mathematics' by George Rusby Kaye is a classic text on the history of mathematics in India. It clarifies the contributions of Hindu mathematicians and traces the exchange of mathematical ideas in the ancient world ...

A Century of Mathematics in America
by Peter Duren, Richard A. Askey - American Mathematical Society
In 100 years the American mathematical community has grown to an influential group that sets the standard for the rest of the world. This book in three volumes depicts the political and mathematical forces that have shaped the AMS in the past century.
(17766 views)

Archimedes
by Thomas Little Heath
History and tradition know Archimedes almost exclusively as the inventor of a number of ingenious mechanical appliances. Few have any acquaintance with the details of the original discoveries in mathematics of the greatest mathematician of antiquity.
(8255 views)

The Story of Euclid
by W. B. Frankland - George Newnes
Euclid was a Greek mathematician, often referred to as the 'Father of Geometry'. His Elements is one of the most influential works in the history of mathematics, serving as the main textbook for teaching mathematics until the early 20th century.
(13667 views)

Vedic Mathematics
by W. B. Kandasamy, F. Smarandache - Automaton
In traditional Hinduism, the Vedas are considered divine in origin and are assumed to be revelations from God. In this book the authors probe into Vedic Mathematics and explore if it is really Vedic in origin or Mathematics in content.
(15578 views)