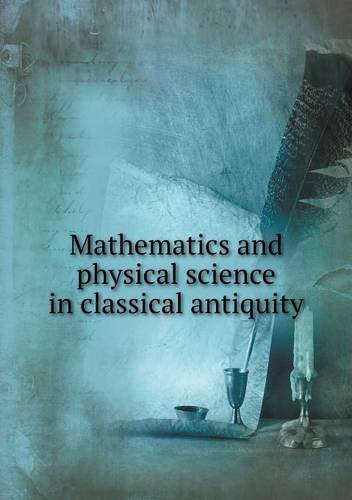 Description:
The volume gives a general survey of the science of Classical Antiquity, laying however special stress on the mathematical and physical aspects. Topics: Ionian Natural Philosophy; The Pythagoreans; Medicine in the Fifth Century - Hippocrates; Mathematics in the Fifth Century; Plato - The Academy; Aristotle - The Lyceum; The Alexandrians; The Epigoni; The Romans; Greek Scientific Literature of the Empire; Byzantium.

Theory of Probability: A Historical Essay
by Oscar Sheynin - arXiv.org
This book covers the history of probability up to Kolmogorov with essential additional coverage of statistics up to Fisher. The book covers an extremely wide field, and is targeted at the same readers as any other book on history of science.
(6777 views)

The Pythagorean Theorem: Crown Jewel of Mathematics
by John C. Sparks - AuthorHouse
The book chronologically traces the Pythagorean theorem from the beginning, through 4000 years of Pythagorean proofs. The text presents some classic puzzles, amusements, and applications. An epilogue summarizes the importance of the theorem.
(17380 views)