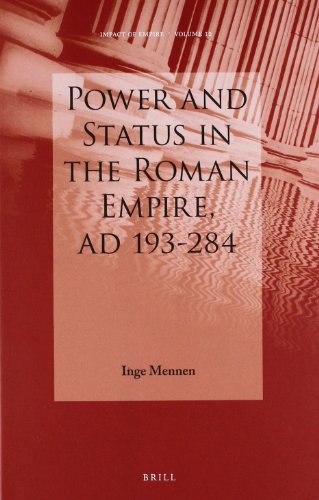 Description:
This book deals with changing power and status relations between the highest ranking representatives of Roman imperial power at the central level, in a period when the Empire came under tremendous pressure, AD 193-284. Based on epigraphic, literary and legal materials, the author deals with issues such as the third-century development of emperorship, the shift in power of the senatorial elite and the developing position of senior military officers and other high equestrians.

Old Rome
by Robert Burn - George Bell & Sons
This is a handbook to the ruins and monuments of ancient Rome and the Campagna. It is divided into topographical sections for the convenience of travelers visiting Rome, and the monuments which exist in each section have been briefly described.
(4582 views)

The Holy Roman Empire
by James Bryce - The Macmillan Company
The object of this treatise is not so much to give a narrative history of the countries included in the Romano-Germanic Empire, as to describe the Holy Empire itself as an institution or system, the wonderful offspring of a body of traditions...
(5076 views)