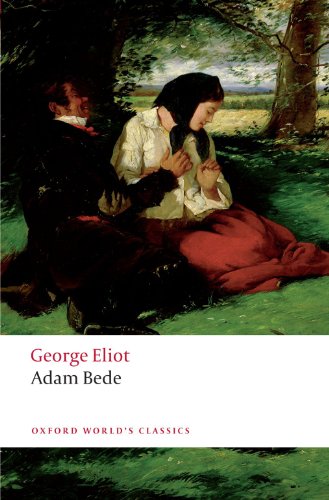 Description:
Novel written by George Eliot, published in three volumes in 1859. The title character, a carpenter, is in love with a woman who bears a child by another man. Although Bede tries to help her, he eventually loses her but finds happiness with Dinah Morris, a Methodist preacher. Adam Bede was Eliot's first long novel. Its masterly realism--evident, for example, in the recording of Derbyshire dialect--brought to English fiction the same truthful observation of minute detail that John Ruskin was commending in the Pre-Raphaelites. But what was new in this work of English fiction was the combination of deep human sympathy and rigorous moral judgment.

Silas Marner
by George Eliot - Collins Clear-Type Press
A tale of gold, love, and betrayal, featuring a weaver, Marner, who becomes a recluse, focusing his affections only on the golden coins he earns for his work. Fate steals the treasure from him and replaces it with a golden-haired child.
(10853 views)

The Mill on the Floss
by George Eliot - A. L. Burt
In this story the author recreates her own childhood through the story of the gifted Maggie Tulliver and her spoilt, selfish brother. Though tragic in its outcome, this comic novel combines vivid images of family life with a portrait of the heroine.
(14808 views)

The Sad Fortunes of the Reverend Amos Barton
by George Eliot
George Eliot's first attempt at fiction, and one that fixed her career. It has qualities of humour and tenderness that have not often been equalled. It has a particular value as a record of an English country life that is rapidly passing away.
(5183 views)

Romola
by George Eliot - Belford, Clarke
A historical novel set in the fifteenth century. Romola is the female protagonist through which the story is rendered; her intellectual growth, often painful, reflects the religious and cultural transitions of the Italian Renaissance in Florence.
(7559 views)