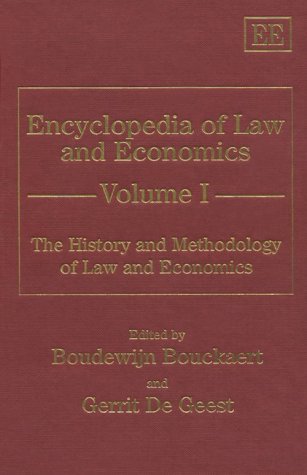 Description:
The Encyclopedia of Law and Economics is a monumental reference work that surveys the entire literature on law and economics in over 3,000 pages. The entries consist of two elements: a review of the literature written by an authority in the field and a bibliography which covers most of the published material in the particular area. The reviews are written in an accessible style which will be suitable for non-specialists, such as lawyers, judges, politicians and students as well as scholars of law and economics. This authoritative Encyclopedia will rapidly become established as a leading bibliographic and reference source in law and economics.

Simple Justice
by Charles Murray - Civitas Book Publisher
The celebrated American sociologist Charles Murray provides an uncompromising restatement and defence of the backward-looking, retributive justification of criminal punishment. He also makes an impassioned plea for England to revert to this approach.
(10787 views)

Punishment: Theory and Practice
by Mark Tunick - University of California Press
What actions should be punished? Should plea-bargaining be allowed? How should sentencing be determined? In this original, penetrating study, Mark Tunick explores not only why society punishes wrongdoing, but also how it implements punishment.
(12861 views)

Criminal Law
by Lisa Storm - University of Minnesota
'Criminal Law' begins with the foundations of law and the legal system and then extensively explores criminal laws and defenses using general state principles, federal law, the Constitution, and the Model Penal Code as guidelines.
(9160 views)

Turning Points of the Common Law
by Robin Brunskill Cooke - Sweet & Maxwell
Cooke focuses on four great cases which were all turning points in the development of the common law. In each instance he examines the effect at the time, subsequent developments in case law and academic opinion, and the advantages of decisions...
(8678 views)