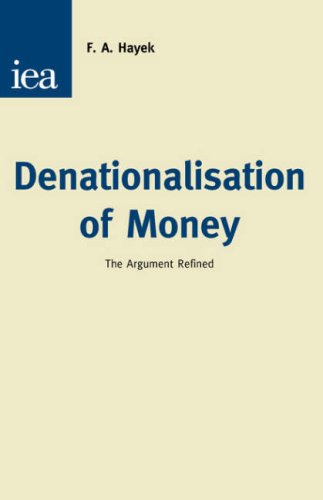 Denationalisation of Money
by F. A. Hayek

Description:
This is Friedrich von Hayek's groundbreaking work, first published in 1976. The author argues that the government monopoly of money must be abolished to stop recurring periods of inflation and deflation. Abolition is also the cure for the recurring waves of unemployment and depression attributed to 'capitalism'.

What Has Government Done to Our Money?
by Murray N. Rothbard - Ludwig von Mises Institute
Rothbard's famous monetary essay has influenced two generations of economists and business professionals. After presenting the basics of money and banking theory, the author traces the decline of the dollar from the 18th century to the present.
(13842 views)

The Theory of Money and Credit
by Ludwig von Mises - Yale University Press
Mises shows how money had its origin in the market, and how its value is based on its usefulness as a commodity in exchange. Mises presents the case for sound money with no inflation, and presents the beginnings of a full-scale business cycle theory.
(12759 views)

Creating New Money
by Joseph Huber, James Robertson - New Economics Foundation
In the information age, money has mainly become information, electronically stored and transmitted. The authors propose a simple reform of monetary policies, and spell out its practicalities step-by-step. The arguments for it are very strong.
(11269 views)