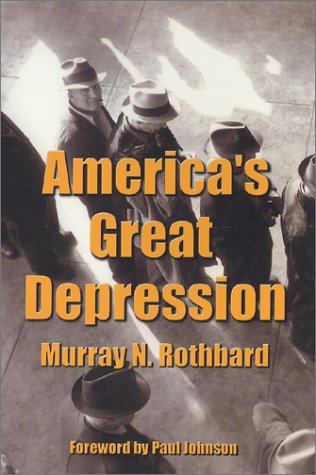 Description:
Murray N. Rothbard's America's Great Depression is a staple of modern economic literature and crucial for understanding a pivotal event in American and world history. Since it first appeared in 1963, it has been the definitive treatment of the causes of the depression. The book remains canonical today because the debate is still very alive.

Control or Economic Law
by Eugen von Böhm-Bawerk - Ludwig von Mises Institute
Gets to the heart of the matter regarding the application of economics to politics. Either we let economic law run its course, or we destroy prosperity. We must defer to economic law or we make matters worse by attempting to control society.
(7047 views)

The Global Political Economy of Israel
by Jonathan Nitzan, Shimshon Bichler - Pluto Press
Diverse processes - such as global accumulation cycles, regional conflicts, militarism and dependency, inflation and recession, the politics of high-technology and the transnationalisation of ownership - are all woven into a single story.
(8114 views)

Privatization of Roads and Highways
by Walter Block - Ludwig von Mises Institute
This treatise on private roads will cause you to rethink the way modern transportation networks operate. It shows how free-market economic theory is the clarifying lens through which to see the alternative that is consistent with human liberty.
(13995 views)

Bourbon for Breakfast: Living Outside the Statist Quo
by Jeffrey A. Tucker - Ludwig von Mises Institute
The state makes a mess of everything it touches. Tucker proposes this path: see how the state has distorted daily life, rethink how things would work without the state, and fight against the intervention in every way that is permitted.
(6247 views)