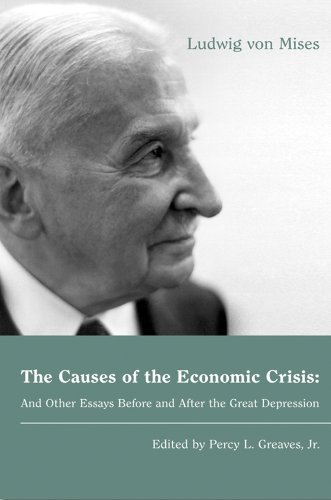 The Causes of the Economic Crisis
by Ludwig von Mises

Description:
Here we have the evidence that the master economist foresaw and warned against the breakdown of the German mark, as well as the market crash of 1929 and the depression that followed. He presents his business cycle theory in its most elaborate form, applies it to the prevailing conditions, and discusses the policies that governments undertake that make recessions worse. He recommends a path for monetary reform that would eliminate business cycles and provide the basis for a sustainable prosperity.

Privatization of Roads and Highways
by Walter Block - Ludwig von Mises Institute
This treatise on private roads will cause you to rethink the way modern transportation networks operate. It shows how free-market economic theory is the clarifying lens through which to see the alternative that is consistent with human liberty.
(14002 views)

Governing Failure: Provisional Expertise and the Transformation of Global Development Finance
by Jacqueline Best - Cambridge University Press
In contrast to the structural adjustment era when policymakers were confident that they had all the answers, the author argues that we are now in an era of provisional governance. This book considers the implications of this shift ...
(6301 views)

Aftershocks: Economic Crisis and Institutional Choice
by A. Hemerijck, B. Knapen, E. van Doorne (eds.) - Amsterdam University Press
The book contains essays based on interviews with leading scholars, politicians and representatives from the world of business. They reflect on the origins of the crisis as well as the possible economic and political transformations it may engender.
(6340 views)