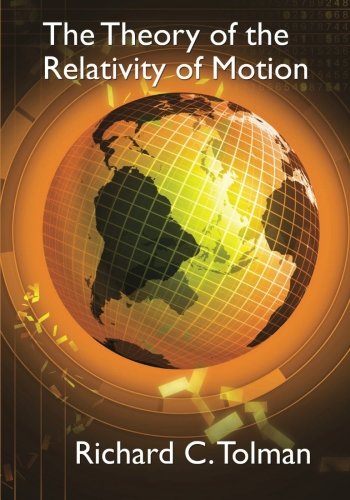 The Theory of the Relativity of Motion
by Richard Chace Tolman

Description:
Classic introduction to Einstein's theory, written by a prominent physicist, provides the two main postulates upon which the theory rests and their experimental evidence. The relation between relativity theory and the principle of least action is discussed, as is a four-dimensional method of expressing and treating the results of relativity theory.

Henri Poincare and Relativity Theory
by A. A. Logunov - arXiv
The book presents ideas by Poincare and Minkowski according to which the essence and the main content of the relativity theory are the following: the space and time form a unique four-dimensional continuum supplied by the pseudo-Euclidean geometry.
(7166 views)

Mechanics and Relativity
by Timon Idema - TU Delft Open
The reader is taken on a tour through time and space. Starting from the basic axioms formulated by Newton and Einstein, the theory of motion at both the everyday and the highly relativistic level is developed without the need of prior knowledge.
(1814 views)

Test Problems in Mechanics and Special Relativity
by Z.K. Silagadze - arXiv
These test problems were used by the author as weekly control works for the first year physics students at Novosibirsk State University in 2005. Solutions of the problems are also given. Written in Russian and English language.
(6307 views)

The Hyperbolic Theory of Special Relativity
by John F Barrett - arXiv.org
The book is a historically based exposition and an extension of the hyperbolic version of special relativity first proposed by Varicak (1910 etc) and others not long after the appearance of the early papers of Einstein and Minkowski.
(521 views)