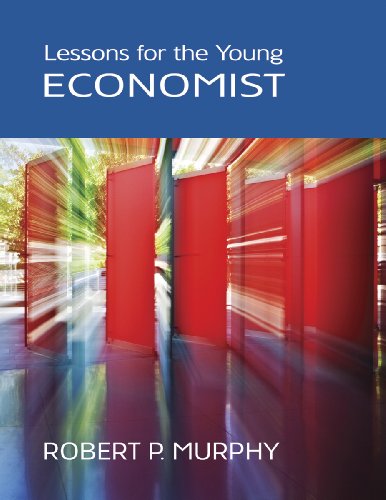 Lessons for the Young Economist
by Robert P. Murphy

Description:
This is easily the best introduction to economics for the young reader because it covers both pure economic theory and also how markets work (the domain of most introductory books). Robert Murphy has the right frame of mind and mastery of the subject matter to provide the best possible pedagogy.

Economics: Theory Through Applications
by Russell Cooper, Andrew John - The Saylor Foundation
This textbook on economics centers around student needs and expectations. Students learn best from an inductive approach, in which they are first confronted with a problem, and then led through the process of solving that problem.
(5119 views)

Economics for Real People
by Gene Callahan - Ludwig von Mises Institute
Fascinating guide to the main ideas of economics, written for the non-economist. Callahan shows that good economics isn't about government planning or statistical models. It's about human beings and the choices they make in the real world.
(13139 views)

A Unified Theory of Capitalist Development
by Adolfo Figueroa - Centrum, Catholic University of Peru
This book is about the science of economics. The scope of economics is to explain the production of goods and its distribution between the social groups of particular human societies. The most important human society of our times is capitalism...
(6906 views)

Principles of Economics
by F.W. Taussig - The MacMillan Company
The author states the principles of economics in such form that they shall be comprehensible to an educated and intelligent person who has not before made any systematic study of the subject. The book does not gloss over difficulties, though.
(9797 views)