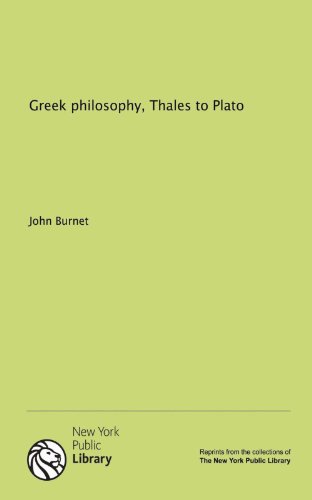 Description:
The author's chief aim has been to assist students who wish to acquire a firsthand knowledge of what Plato actually says in the dialogues of his maturity. So long as they are content to know some thing of the Republic and the earlier dialogues, Platonism must be a sealed book to them. John Burnet is best known for his work on Plato.

Philosophy and The Social Problem
by Will Durant - The Macmillan Company
The purpose of this essay is to show that the social problem has been the concern of many of the greater philosophers, and that an approach to the social problem through philosophy is the first condition of a successful treatment of this problem.
(3497 views)

Interpreting Philosophy: The Elements of Philosophical Hermeneutics
by Nicholas Rescher - Ontos Verlag
Philosophers are too busy doing philosophy to take time to stand back and consider how the project itself works. This is a good reason for philosophical hermeneutics, reflecting on the issue of how philosophical texts are to be interpreted.
(3504 views)

History of Modern Philosophy
by Alfred William Benn - Watts & Co.
The author was an agnostic and an honorary associate of the Rationalist Press Association. Contents: The Philosophical Renaissance; The Metaphysicians; The Theorists of Knowledge; The German Idealists; The Humanists of the Nineteenth Century.
(5463 views)

The Greek Philosophers
by Alfred William Benn - Kegan Paul, Trench, & co.
The appearance of a new idea can only be made intelligible by tracing the previous tendencies. The history of philosophy has itself a philosophy which requires that we go beyond particular phenomena and view them as related parts of a single system.
(3673 views)