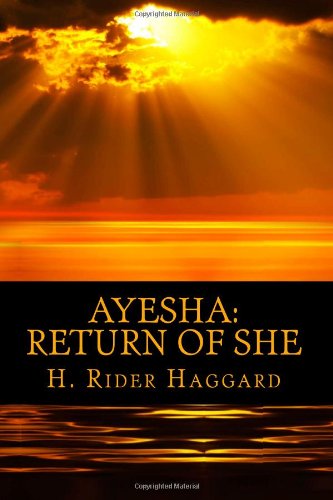 Ayesha: The Return of She
by Henry Rider Haggard

Description:
A worthy sequel, and one that all admirers of Haggard's original story should enjoy reading. It is a direct continuation of the earlier book, and as such may be called required reading for all fans of Ayesha, Leo Vincey and Ludwig Holly. The novel contains many exciting scenes, including a great avalanche, the pursuit of the death hounds, Ayesha's reincarnation, and the climactic battle with Kalloon.

Lysbeth: A Tale of the Dutch
by H. Rider Haggard - Longmans, Green, and co.
A tale of two ivory hunters in Africa who come across the deserted camp of a German anthropologist -- a man who had been studying the life and language of the great apes. Sir Henry Rider Haggard is best known for his adventure novels.
(3230 views)

Benita, An African Romance
by Henry Rider Haggard - ManyBooks
Benita is a strong woman born in Africa, raised in England, who is returning to Africa to be with her father. She falls in love with Robert on the long steamer voyage, and is about to say yes to his proposal when the ship hits a rock ...
(5219 views)

Eric Brighteyes
by Henry Rider Haggard - Longmans, Green
A must for all Haggard fans, 'Eric Brighteyes' is strongly recommended to anyone who enjoys a great tale of heroic endeavour. Perhaps the fastest-paced of all Haggard's many novels, it races from one highspot to another with vivid scene-setting.
(6850 views)

Jess
by H. Rider Haggard - ManyBooks
An African domestic drama set in Pretoria at the time of the Boer War. Captain John Niel comes to work on the Transvaal farm of a fellow Englishman, Silas Croft, and becomes involved in a love triangle of sorts with Croft's two nieces...
(3560 views)