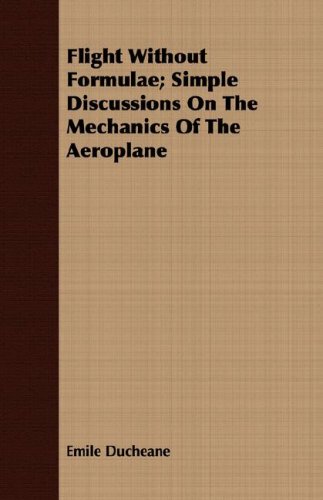 Flight Without Formulae: Simple Discussions on the Mechanics of the Aeroplane
by Emile Auguste Duchene

Description:
The present work has throughout been written in the simplest possible language, and contains in its whole extent not a single formula. It treats of every one of the principles of flight and of every one of the problems involved in the mechanics of the aeroplane, and this without demanding from the reader more than the most elementary knowledge of arithmetic.

Apollo by the Numbers: A Statistical Reference
by Richard W. Orloff - NASA History Division
With the passage of time there are opportunities to reconsider Project Apollo anew. This book draws out the statistical information about each of the flights that have been long buried in numerous technical memoranda and historical studies.
(15309 views)

The Secret of Flight
by Johan Hoffman, Johan Jansson, Claes Johnson
A theory of subsonic flight based on a combination of analysis and computation. We uncover a mechanism for the generation of substantial lift at the expense of small drag of a wing, which is fundamentally different from the classical theories.
(27307 views)

Beyond Horizons: A Half Century of Air Force Space Leadership
by David N. Spires - AU Press
This book tells the story of the origins and development of the United States Air Force's space program from its earliest beginnings in the post Second World War period to its emergence as a critical operational presence in the Persian Gulf War.
(13349 views)

Facing the Heat Barrier: A History of Hypersonics
by T. A. Heppenheimer - NASA
Hypersonics is the study of flight at speeds where aerodynamic heating dominates the physics of the problem. Typically this is Mach 5 and higher. Hypersonics is an engineering science with close links to supersonics and engine design.
(14813 views)