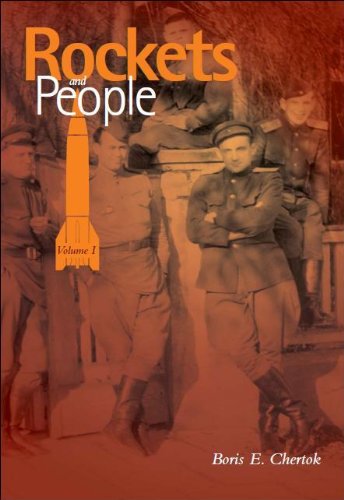 Description:
Volume 1 of the memoirs of academician Boris Chertok, translated from the original Russian. Describes his early years as an engineer and ends with the mission to Germany after the end of World War II when the Soviets captured Nazi missile technology and expertise.

Rockets and People: Volume IV: The Moon Race
by Boris Chertok - NASA
In this volume the famous spacecraft designer Boris Chertok, who worked under Sergey Korolev, continues his fascinating narrative on the Soviet space program, this time covering 1968 to 1974, the peak years of the Soviet human lunar program.
(5863 views)

Basics of Space Flight
by Dave Doody - NASA
This tutorial is designed to help operations people identify the range of concepts associated with deep space missions, and grasp the relationships among them. It also enjoys popularity with people interested in interplanetary space flight.
(19523 views)

Flying Beyond the Stall
by Douglas A. Joyce - NASA
The X-31 was unique in the world of experimental or X-airplanes. It was the only X-plane that was designed, manufactured, and tested as an international effort; a joint effort of the United States and Germany. It supported two separate test programs.
(3145 views)

The Future of Remote Sensing From Space
- U.S. Congress, Office of Technology Assessment
This report examines issues related to the development and operation of publicly funded U.S. and foreign civilian remote sensing systems. It also explores the military and intelligence use of data gathered by civilian satellites.
(3422 views)