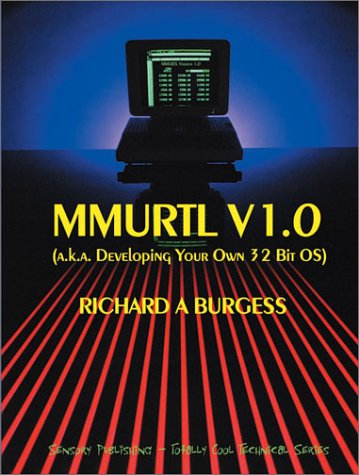 MMURTL V1.0
by Richard A. Burgess

Description:
Originally titled Developing Your Own 32 Bit Operating System this book shows you how one man built a complete, 32 bit operating system for the Intel processors from scratch, running on processors from the 80386, all the way up to the Pentium III.

A History of Apple's Operating Systems
by Amit Singh - kernelthread.com
This document discusses operating systems that Apple has created in the past, and many that it tried to create. Through this discussion, we will come across several technologies the confluence of which eventually led to Mac OS X.
(7830 views)

Operating Systems and Middleware: Supporting Controlled Interaction
by Max Hailperin - Gustavus Adolphus College
Intended for juniors, seniors, and first-year graduate students, this book takes a modern approach to the Operating Systems course. By using this text, students will obtain an understanding of how contemporary operating systems and middleware work.
(10173 views)

Programming the Be Operating System
by Dan Parks Sydow - O'Reilly
This book gives C++ programmers their start to developing the applications on Be operating system. The book begins with simple programs and gradually adds elements of the graphical interface. It carefully describes drawing and message handling.
(17658 views)

Implementing CIFS: The Common Internet File System
by Christopher Hertel - Prentice Hall PTR
CIFS is Microsoft's standard for Internet file sharing. This book is a cross-platform guide to CIFS capabilities and behavior for developers who want to add CIFS compatibility to their products, and for network and system administrators.
(12963 views)