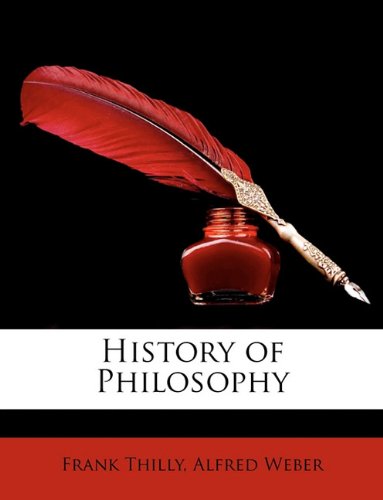 History of Philosophy
by Alfred Weber

Description:
The author combines in his person the best elements of French and German scholarship. His knowledge of the subject is thorough and extensive, his judgment sound, his manner of expression simple, clear, and precise. The history of philosophy is not conceived as an aggregate of isolated, disconnected theories, but as an evolution, as a more or less logical development, as a process from the simple to the complex.

The Greek Philosophers
by Alfred William Benn - Kegan Paul, Trench, & co.
The appearance of a new idea can only be made intelligible by tracing the previous tendencies. The history of philosophy has itself a philosophy which requires that we go beyond particular phenomena and view them as related parts of a single system.
(3675 views)

Initiation into Philosophy
by Emile Faguet - G. P. Putnam's sons
A fantastic look at the whole history of Philosophy from ancient times up to the beginnings of modern thinking. Covers all the major philosophers and philosophical theories, as well as the historical interplay between religion and philosophy.
(820 views)

Against the Men of the Crowd
by Cassius Amicus - Smashwords
This volume is a Guide to the Ancient Philosophy of Independent Thinking And Personal Happiness, Based on the Texts of Its Founder and Leading Proponents. Prepared from the ancient texts of Epicurus, Lucretius, Diogenes of Oinoinda, and others.
(3562 views)