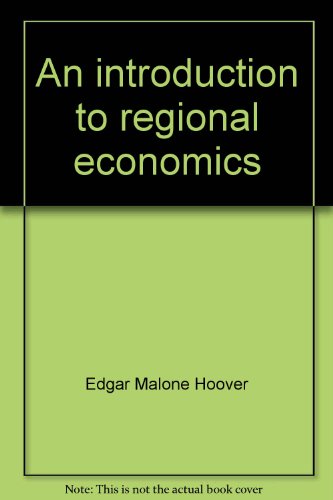 Description:
This book is designed primarily to serve as a college text for the student's first course in regional economics, at either the upperclass or the graduate level and running for either one or two terms. It presupposes no previous exposure to regional economics as such, nor anything beyond a minimal background in basic economics, nor any advanced mathematical expertise.

Efficiency and Externalities in an Open-Ended Universe
by Roy Cordato - Ludwig von Mises Institute
This important book is a thorough and extensive study, in which Cordato shows that there is no standard by which we can judge efficiency apart from the market standard, and no way to adjudicate property rights apart from exchange relationships.
(9873 views)

Economic Fables
by Ariel Rubinstein - Open Book Publishers
Part memoir, part crash-course in economic theory, this deeply engaging book by one of the world's foremost economists looks at economic ideas through a personal lens. Rubinstein challenges many of the central tenets of game theory.
(4595 views)

Capital and Its Structure
by Ludwig Lachmann - Ludwig von Mises Institute
A robust theory of capital that incorporates an Austrian understanding of the business cycle and the market process. This book remains a seminal study written while the author was at the height of his intellectual powers.
(11324 views)