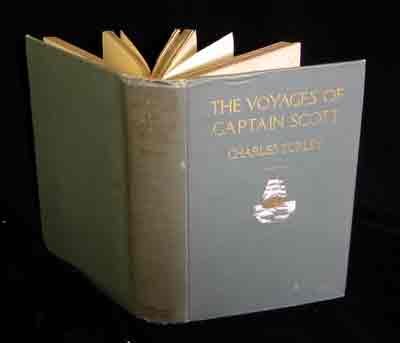 The Voyages of Captain Scott
by Charles Turley

Description:
Robert Falcon Scott (1868 – 1912) was a British Royal Naval officer and explorer who led two expeditions to the Antarctic regions: the Discovery Expedition, 1901–04, and the ill-fated Terra Nova Expedition, 1910–13. During this second venture Scott led a party of five which reached the South Pole on 17 January 1912, to find that they had been preceded by Roald Amundsen's Norwegian party in an unsought "race for the Pole". On their return journey Scott and his four comrades all perished because of a combination of exhaustion, hunger and extreme cold.

In the South Seas
by Robert Louis Stevenson - Scribner
In his book Stevenson gives an accurate and in depth look into the people and culture of the islands of the South Pacific. The book describes the author's two year journey from the Marqueses Islands, to Tahiti, then Honolulu, and finally Samoa.
(11999 views)

Man-Eaters of Kumaon
by Jim Corbett - Oxford University Press
Jim Corbett killed a leopard at the age of nine and achieved a legendary reputation as a hunter. Here is the best of his books, which offers fascinating tales of pursuing tigers in the Indian Himalayas during the beginning of 20th century.
(26697 views)

The Heart of Arabia: A Record of Travel and Exploration
by H. St. J. B. Philby - Constable & Co.
Of the pleasant year I spent sojourning and wandering amid the deserts and oases of Arabia I have endeavoured to compile a record, at once fully descriptive of my own experiences and designed to serve my successors as a guide in their wanderings.
(7787 views)