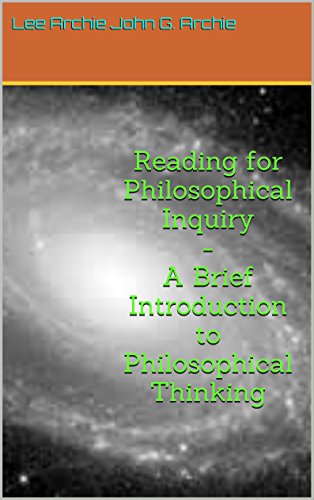 Description:
In this introduction to philosophical thinking, we will read some essays specially chosen from four main areas of interest: (1) the philosophy of life, (2) the philosophy of religion, (3) ethics, and (4) metaphysics and theory of knowledge. Although our approach is not comprehensive, it is reasonably representative of some of the more significant areas of philosophical inquiry. The readings are intended to illustrate the interrelations between these subject areas of philosophy and, as well, to provide the foundations for future investigations of these and related problems.

The Greek Philosophers
by Alfred William Benn - Kegan Paul, Trench, & co.
The appearance of a new idea can only be made intelligible by tracing the previous tendencies. The history of philosophy has itself a philosophy which requires that we go beyond particular phenomena and view them as related parts of a single system.
(4867 views)

Initiation into Philosophy
by Emile Faguet - G. P. Putnam's sons
A fantastic look at the whole history of Philosophy from ancient times up to the beginnings of modern thinking. Covers all the major philosophers and philosophical theories, as well as the historical interplay between religion and philosophy.
(2605 views)

History of Modern Philosophy
by Alfred William Benn - Watts & Co.
The author was an agnostic and an honorary associate of the Rationalist Press Association. Contents: The Philosophical Renaissance; The Metaphysicians; The Theorists of Knowledge; The German Idealists; The Humanists of the Nineteenth Century.
(6721 views)

The Philosophy of Immanuel Kant
by A. D. Lindsay - T.C. & E.C. Jack
All that the writer of a book like this can hope to do is to persuade others to undertake that study by interesting them in the problems with which it deals, and by offering a few suggestions which may help to an understanding of it.
(4571 views)