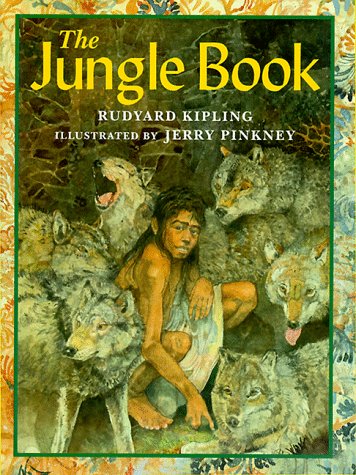 Description:
For the past one hundred years, Rudyard Kipling's classic tales of Mowgli, the lost boy raised by wolves in the jungles of India, have captivated children and adults alike. Mowgli's days are filled with danger, wonder, and excitement. He learns the ways of the jungle from the wise old bear, Baloo, and the great black panther, Bagheera. He is befriended by the faithful wolf, Gray Brother, and is carried off by the crafty Monkey-People -- only to be rescued by the mighty python, Kaa. And through it all, Mowgli knows that he must someday face his sworn enemy: the ferocious man-hating tiger, Shere Khan.

Treasure Island
by Robert Louis Stevenson - Harper & Brothers
The most popular pirate story ever written, Treasure Island has been happily devoured by several generations of boys and girls. Jim Hawkins finds himself owner of a map to Treasure Island, where the fabled pirate booty is buried.
(12826 views)

Whirl of the Wheel
by Catherine Condie - Bear Books on Smashwords
Three children whirl back in time through an enchanted potter's wheel into the 1940s Britain. The Wheel pulls Connie, her brother, and Malcolm into dangers on the homefront. The children hit trouble when Malcolm fails to return to the present day.
(6373 views)

The Prince and the Pauper
by Mark Twain - James R. Osgood & Co.
With its mixing of high adventure, raucous comedy, and scathing social criticism, presented in a hilarious vernacular that only Mark Twain could fashion, the book remains one of this incomparable humorist's most popular and oft-dramatized tales.
(11401 views)

Uncle Tom's Cabin
by Harriet Beecher Stowe - Project Gutenberg
The moving abolitionist novel that fueled the fire of the human rights debate in 1852 and melodramatically condemned the institution of slavery through such powerfully realized characters as Tom, Eliza, Topsy, Eva, and Simon Legree.
(10237 views)