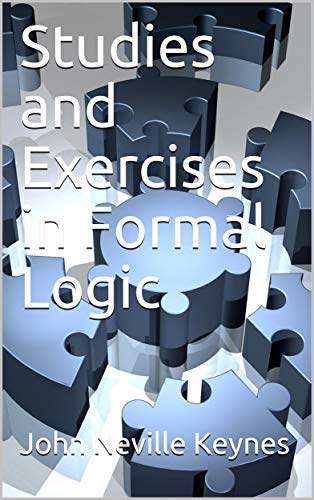 Studies and Exercises in Formal Logic
by John Neville Keynes

Description:
In addition to a somewhat detailed exposition of certain portions of what may be called the book of Formal Logic, the following pages contain a number of problems worked out in detail and unsolved problems, by means of which the student may test his command over logical processes.

Introduction to Logic and Critical Thinking
by Matthew Van Cleave - Lansing Community College
This is an introductory textbook in logic and critical thinking. The goal is to provide the reader with skills that will enable them to identify and evaluate arguments. It is intended for an introductory course that covers formal and informal logic.
(6918 views)

Fundamental Methods of Logic
by Matthew Knachel - University of Wisconsin Milwaukee
Suitable for a one-semester introduction to logic/critical reasoning course. It covers a variety of topics at an introductory level. It introduces basic notions, such as arguments and explanations, deductive and inductive reasoning, etc.
(4921 views)

The Principles Of Mathematics
by Bertrand Russell - W. W. Norton & Company
Russell's classic sets forth his landmark thesis that mathematics and logic are identical -- that what is called mathematics is simply later deductions from logical premises. His ideas have had a profound influence on the foundations of mathematics.
(12405 views)

Deductive Logic
by St. George Stock - Longmans
The author's object has been to produce a work which should be thoroughly representative of the present state of the logic of the Oxford Schools. The qualities which he aimed at before all others were clearness and consistency.
(10393 views)