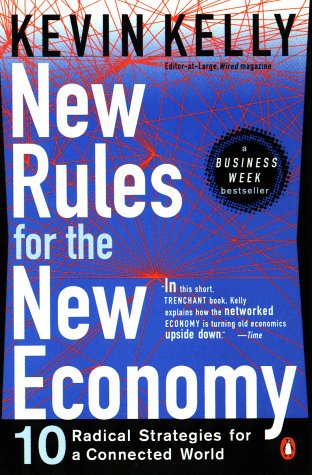 New Rules for the New Economy
by Kevin Kelly

Description:
Founding editor of Wired magazine, Kevin Kelly has long been one of the new economy's chief hypesters. In this book Kelly tries to encapsulate the characteristics of this emerging economic order by laying out 10 rules for how the wired world operates. The result is a dizzying and thought-provoking look at the behavior of networks and their effect on our economic lives. At the root of this network revolution is communication.

The Origin and the Evolution of Firms: Information as a Driving Force
by J. A. Roels - IOS Press
This book develops a consistent theory of evolution in its wider sense. The author of the book traces a continuous line of evolving information sets that connect the Big-Bang to the firms and markets of our current socio-economic system.
(4835 views)

Economics and Language
by Ariel Rubinstein - Cambridge University Press
Five essays investigating both the economics of language and the language of economics. The author touches on the structure of binary relations in daily language, the evolutionary development of the meaning of words, and more.
(15769 views)

Economics in One Lesson
by Henry Hazlitt - Pocket Books
This book is an analysis of economic fallacies that are so prevalent that they have almost become a new orthodoxy. Their own self-contradictions have have scattered those who accept the same premises into a hundred different 'schools'.
(24610 views)