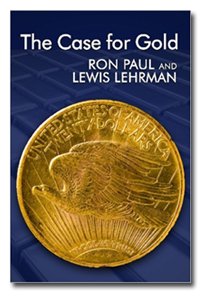 The Case for Gold
by Ron Paul

Description:
The book covers the history of gold in the United States, explains that its breakdown was caused by governments, and explains the merit of having sound money: prices reflect market realities, government stays in check, and the people retain their freedom. It still holds up as an excellent blueprint for moving beyond paper money and into the age of sound money. In particular, Ron favors complete monetary freedom to use any commodity as money, to make contracts in any money, and an end to the monopolization and printing power of the Federal Reserve.

Modern Money Mechanics
- Federal Reserve
This booklet describes the basic process of money creation in a fractional reserve banking system. The approach taken illustrates the changes in bank balance sheets that occur when deposits in banks change as a result of monetary action.
(18969 views)

The Inflation Crisis, and How to Resolve It
by Henry Hazlitt - Arlington House
The author attempted to analyze thoroughly and in depth nearly a score of major problems raised by inflation and chronic fallacies that are in large part responsible for its continuance. Henry Hazlitt is the author of numerous books in economics.
(17353 views)

Financial Markets and Economic Activity
by Donald D. Hester, James Tobin - J. Wiley and Sons
The subjects of this monograph concern the conditions of equilibrium in economy-wide financial markets. The authors investigate the consequences of various institutions and regulations for the effectiveness of monetary control.
(8204 views)

Denationalisation of Money
by F. A. Hayek - Coronet Books
The author argues that the government monopoly of money must be abolished to stop recurring periods of inflation and deflation. Abolition is also the cure for the recurring waves of unemployment and depression attributed to 'capitalism'.
(11607 views)