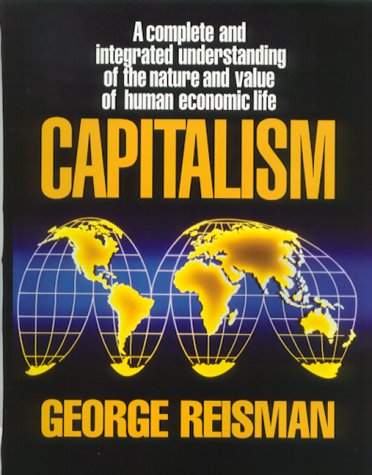 Capitalism: A Treatise on Economics
by George Reisman

Description:
Author rejects the Keynesian doctrine that government must adopt a policy of budget deficits to cope with unemployment, contending, to the contrary, that federal intervention in the economic system is a root cause of inflation, credit expansion, depression and mass unemployment. Reisman staunchly defends capitalists as risk-takers who raise the average worker's real wages and living standards, increasing productivity and improving the quantity and quality of goods.

Plunder and Blunder: The Rise and Fall of the Bubble Economy
by Dean Baker - PoliPoint Press
The book chronicles the growth and collapse of the stock and housing bubbles and explains how policy blunders and greed led to the catastrophic market meltdowns. Baker offers policy prescriptions to help prevent similar financial disasters.
(6638 views)

Global Imbalances and the Collapse of Globalised Finance
by Anton Brender, Florence Pisani - Centre for European Policy Studies
The world economy is recovering from the most disastrous episode in the history of globalization. The authors argue that the main problems were deeply rooted and are to be found in two developments that for many years were left uncontrolled.
(13122 views)

Capital at the Brink: Overcoming the Destructive Legacies of Neoliberalism
by Jeffrey R. Di Leo, Uppinder Mehan (eds.) - Michigan Publishing
The book reveals the pervasiveness, destructiveness, and dominance of neoliberalism within American society and culture. The contributors also offer points of resistance to an ideology wherein everything either is for sale or is plundered for profit.
(5279 views)

Bourbon for Breakfast: Living Outside the Statist Quo
by Jeffrey A. Tucker - Ludwig von Mises Institute
The state makes a mess of everything it touches. Tucker proposes this path: see how the state has distorted daily life, rethink how things would work without the state, and fight against the intervention in every way that is permitted.
(5800 views)