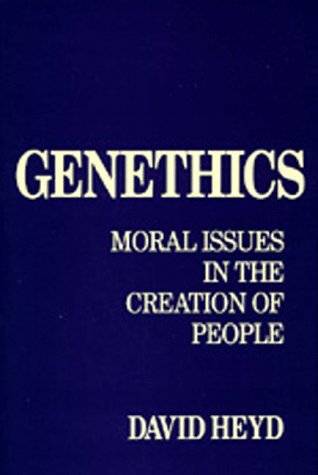 Genethics: Moral Issues in the Creation of People
by David Heyd

Description:
Unprecedented advances in medicine, genetic engineering, and demographic forecasting raise new questions that strain the categories and assumptions of traditional ethical theories. Heyd's approach resolves many paradoxes in intergenerational justice, while offering a major test case for the profound problems of the limits of ethics and the nature of value.

Animals and Ethics 101
by Nathan Nobis - Open Philosophy Press
The book presupposes no conclusions on the controversial moral questions about the treatment of animals, and argues for none either. Its goal is to help the reader better engage the issues and arguments on all sides with greater clarity.
(2981 views)

Why I Am Not a Christian
by Bertrand Russell
This is a famous but very controversial piece by Bertrand Russell. He examines several highly regarded arguments for the existence (or necessity) of God. His main point however is the possibility of morality based on another principle than God.
(5103 views)

A Problem in Modern Ethics
by John Addington Symonds
In this work, Symonds argues against the belief that homosexuality is acquired. The book includes an historical survey of homosexuality, various modern theories as to its cause, and a section dealing with suggested amendments in legislation.
(12017 views)