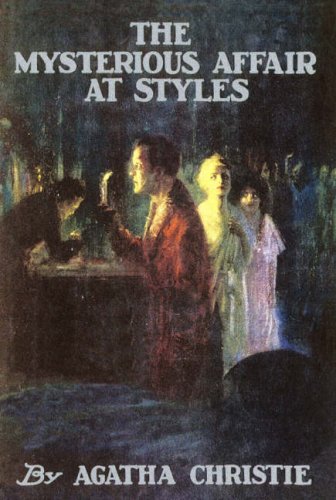 The Mysterious Affair at Styles
by Agatha Christie

Description:
The heiress of Styles has been murdered, dying in agony from strychnine slipped into her coffee. And there are plenty who would gain from her death: the financially strapped stepson, the gold digging younger husband, and an embittered daughter-in-law. Agatha Christie's eccentric and hugely popular detective, Hercule Poirot, was introduced to the world in this book, which launched her career as the most famous and best loved of all mystery writers.

The Amateur Cracksman
by E. W. Hornung - Charles Scribner's Sons
The first in a series of books of the anti-hero, Raffles, a gentleman and a cricket player, who supports himself by carrying out ingenious burglaries. Told a la Sherlock Holmes stories, by Raffles' friend, with a good sense of humor.
(7385 views)

Always a Cold Deck
by Robert Bruce Stewart
Harry Reese is sent to Buffalo, New York, to look into a fire that has destroyed a grain elevator. But when he uncovers a smuggling, the case morphs into something more serious. Trains and steamships feature prominently as he crosses into Canada.
(5912 views)

From Darkness
by Matthew Benefiel - Smashwords
Robert Drake did not think much of his father's attempt to sway his dreams of becoming an FBI agent, nor the hallucination that took place during that attempt. It was long behind him now and he was bound and determined to make his own way in life.
(6567 views)

The Mardi Gras Mystery
by Henry Bedford-Jones - Doubleday, Page & Company
This novel is an interesting mystery set in New Orleans at Mardi Gras involving a young woman, a young man, and an older man who are involved in a mystery of masques, burglary, a mysterious art theft, murder, fraud and illegal lotteries.
(5809 views)